I believe pocket gophers ate at least 5 of the 2014 food forest trees. I was out spreading seeds for ground cover on the newer swale when I saw a tree laying down. I went over and realized it wasn’t broken but rather it had been eaten away from the roots.

I then walked down the line and was able to pull up more trees. I am hoping some of the trees will survive so I put rooting hormone on them and brought them home. Most likely they are dead but some had a few roots. I also took cuttings but most of them looked really dry already.

So what can I do to protect the trees from gophers? Use wite around them thatgoes at least three feet deep. And I’m wondering if deeper and something on the bottom would be best. 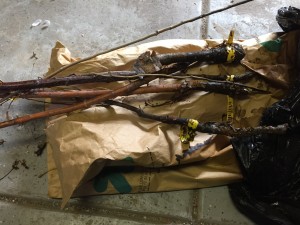 Either the daffodils or luck has kept the 2013 trees safe. I read that daffodils planted around the trees deter varmints as well as marigolds and onions. I picked up a pack of 100 onion bulbs and planted them around the other trees.

I built some stand that I hope attract the resident owl and some Hawks for the brief times they surface.

Poison can be applied to their active burrows.

I think something like voles may be enjoying the hugel swales so I’m going to keep an eye on them.

I think I will apply as many safe guards as possible and will order a hundred or more daffodils.

To note I didn’t see any damaged nitrogen trees which were every third tree in the row.

Also the asparagus patch looks ok even though there are signs of gopher activity in it. Do gophers eat asparagus? Looks like they haven’t so far.