The chickens were happy to get to scratch in the shade under the apple tree!  The chicken tractor isn’t here yet but we changed the fencing again to give them a new area for the day. 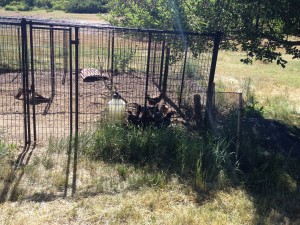 We also picked up organic and thus non gmo feed for the chickens along with organic scratch as a treat for them. 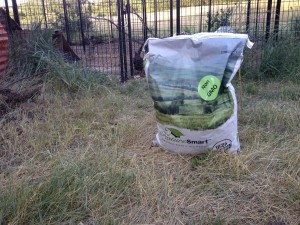 I dug up two of my largest comfrey plants that were planted as 1 or 2 year old crowns last year.  They were huge this year as in over 2 feet tall and 3 feet wide.  I split each plant into two plants and cut off some of the longer and larger roots to produce more plants since that is the only way to propagate the sterile bocking 4 variety of comfrey.  I cut most all of the leaves off of the plants and blended them in a blender to speed up the process of making comfrey tea fertilizer.  This will be my first batch of bocking 4 comfrey tea.  I started a batch of common comfrey tea a week or so ago.

The photos are of the original largest plant in the ground, then dug up, then with the roots cleaned.  Between the two plants I took over 10 root cuttings which were all a bit larger than the root cuttings I bought last year.

In the ground originally 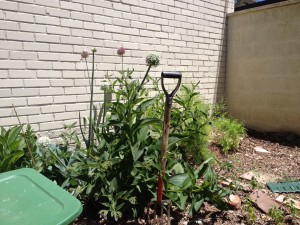 Trimmed but not separated.

Lots of roots and I bet some broke off when I dug it up. 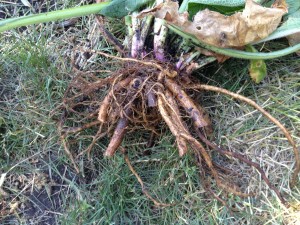 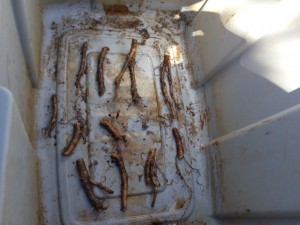 I put half of the plant here along with 10 root cuttings near the chicken coop to catch the rain and here because we interact with the chickens often.  The dirt was amended with steer manure and the dirt from the chicken area.  Comfrey grows in most any soil but we want to have it thrive thus the amendments. 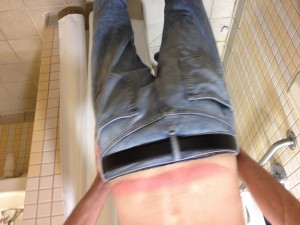 This weekend I weeded just over 500 feet of asparagus we planted this year.  I enjoyed pulling out the young tumble weeds.  They are great and appearing  where I’ve disturbed the soil.  I should have had a longer shirt or sunscreen.  I ended up with about a 1 inch sunburn across my lower back since I weeded on my hands and knees.

I dug up two if the bocking 4 comfrey plants that I planted last year to move them to our new house.  I cut away most of their stems and leaves which I will use to make comfrey tea.  About a week ago I picked a lot of the common comfrey from the new house and put it in a bucket with water and it is already stinky and turning the  water black.  So far so good. 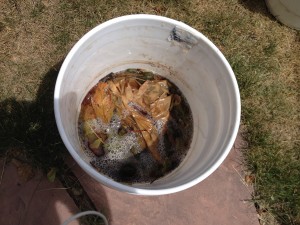 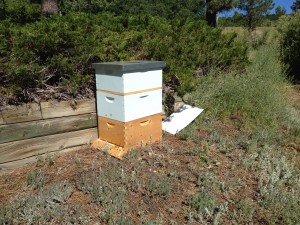 This year we got our first hive so we are learning a lot about bees.  The top box only has the gallon of sugar water.  The middle box is the box we just added.  It took the bees a little less than two months to fill the first box.

The bees arrived on May 3rd.   They were placed in a 10 frame hive.  Their shipping container was placed in the hive rater than knocking them into the hive.  I thought that was nicer for them and I didn’t want to irritate them.  You could also note I was scared of them.

I they were giver sugar water as well as a bee patty.  The queen was placed in her shipping g cage with a marsh mellow keeping her in place for a few days.

A week or so later I removed the shipping container and inserted the other frames.  Then only their sugar water was replenished.  The mix is 5 pounds of sugar in a one gallon container.

Fast forward to June 27th.  The bees now have another 10 frame box on top of their original box.  And it looked like they were ready for it since they had build comb on all the original frames and now were building comb on the bottom of the separator panel.

Sugar water was sprayed in the air.  The bees were rather calm with the hive being open and the extra comb being scraped off.

A little bit of honey was in the comb so we had our first taste of local honey.

This is the package of the food forest we planted in 2014 along a swale in the middle of the property.  This package contains a combination of 64 bare root trees and shrubs.  This is the 2nd year in a row that I ordered trees from St Lawrence Nurseries. For perspective the each of the wood planks are 6 inches wide. 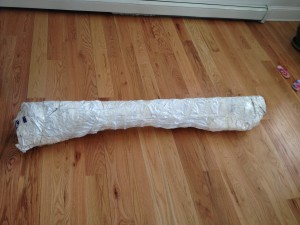 Regen Farms is farming the land in a way that regenerates the land.  The first farm project is on 20 acres on the eastern plains of Colorado. The goal is to have a productive farm where people come to learn about permaculture and farming for the high plains. We are finding ways to regenerate pasture land to be much more productive with improved soils. Many different fruit, nut and herb species have been planted to trial their productivity in the environment.

The site is on the easter plains of Colorado about 30 minutes east of Denver.  Average rain fall is listed as 15 inches a year.  Since beginnin the project there have been days a weeks with over 2 inches of rain.  The soil is very sandy so most rain fall soakes in rather quickly.  The land was mostly open pasture which had been cut for hay for several years.

3 hugel swales supporting 2 food forests
1000 asparagus plants on contour below a food forest
25 hybrid hazel bushes on the south side of the asparagus to be a productive wind block.

Over 130 trees were planted along the north side of the property for a wind blocking forest.  These trees include bur oak, pinion pine and ponderosa pines.  Native plum, wax currant and willow were planted around the site for wild life and wind blocking.

We make some biochar and have bought biochar to amend the soil when planting plants.